My company is located in Piedmont, in the Langhe region, the heart of the origin area of hazelnut “Tonda
Gentile delle Langhe”. The multiplication happens in Ceresole d’Alba, in order to avoid contaminations.
This variety is recognized as the best in the world because of its features. Example could be the extremely
low content in fats that avoids the product to become rancid as well the great organoleptic properties or
the high kernel to shell ratio. 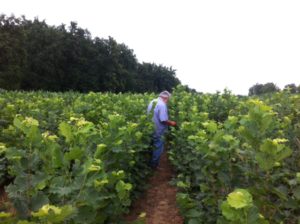 Furthermore the excellence of this variety is lent by its particular scent that passes on a delicious taste to its derived. The variety has sprout naturally, then casually discovered and treasured through the years.
In recent times, the burnt of different local business, helped to increase the value of the hazelnut and all its
derived in a global scale.
The climate change, with the increase in temperatures, allows the hazelnut cultivation also in areas where it was not possible before. There are different positive results in European areas, like Romania.
The flowers are monoecious with single-sex wind-pollinated catkins from other varieties.
It is a plant with precocious maturation (in Piedmont, usually from 20th to 30th August).

Different experiences in the center of Italy preempt the maturation of 10 days; depending by the year. This plant needs draining soil and it improve the production if irrigated. 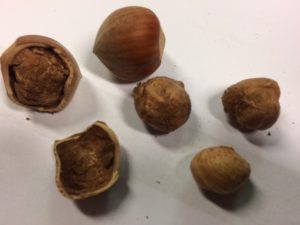 The first considerable production happens from the fourth to the fifth year till the major production at about 8-9 years. From a phytosanitary point of view, the hazelnut is a plant with a huge equilibrium and we have to respect it.
The major risks are:
• Eriophydae, an acarus treatable with products composed in sulfur;
• Curculio elephas, a small beetle, and the stink bugs (pentatomidae).

They have to be controlled with monitoring traps and treated with low-toxicity products.
Very important is the nutrition, in fact, the plant has a particular absorption, related to its biological cycle.
The differentiation of reproductive buds happens in July, and the blooming is in January. The plant bears fruit on the sprout of the previous year, which has to be at least 8 cm long. In particular, the plant needs nitrogen available during all the year, and the maximum absorption happens from August to September, which is the period where are settled up reserve substances.

Moreover, the presence in to the soil of other macro-micro elements is essential for their biological actions.